Georgetown, way back in the hippie trail days, I ran into a high school friend who had fallen under the influence of Jack Kerouac and was hammering out a road novel.

On a Remington typewriter, cast in solid metal. Not sure what came of the work but by the time I quit Chulia Street the pauses between the clacks were growing longer with each passing minute. Whether it’s a hot water bottle or a blow dryer, most of us will sometimes pack stuff we really don’t need. Here are 10 things that don’t belong in your case.

Is this not an oxymoron? Irons are not made to travel. Nor will it bring you joy should you travel with one, despite your crisp cotton shirt. Hotels have irons, and housekeeping will happily do it for a modest sum. Unless you happen to be staying in a fancy hotel in Paris, in which case the cost for pressing might be more than the original item. Black T-shirts hide a multitude of sins. 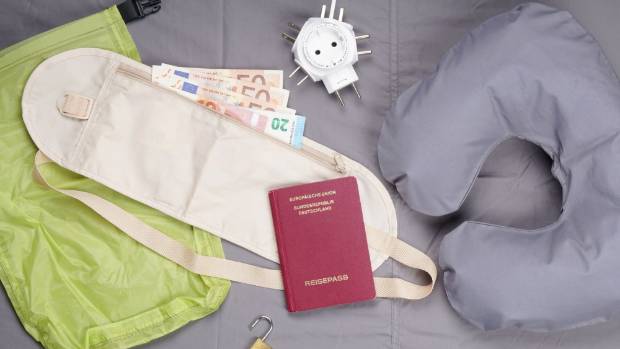 Yes you need your passport but leave the pillow and money belt at home.

For starters, your cover will most likely be blown the moment you walk through airport security, get a pat-down and get told to do the big reveal. Next, are you really going to be hoisting up your shirt every time you go to pay a restaurant bill? Thieves can smell a money belt as a bear does nectar. Walking around carrying scads of cash is asking for trouble. ATM machines and credit cards make it easy to travel with just small amounts.

Crap presents for the locals

Pens? Kids all over the third world know the word, or “stylo” if they happen to have enjoyed the wondrous advantages of French colonial domination. Handing out pens fosters mob violence among six-year-olds and encourages children to view foreign tourists as cargo-cult figures.

Sweets? Only if you offset the damage you’re causing by handing out toothbrushes and toothpaste. If travel motivates you to kind acts that will change a third-world child’s life in some long-term and meaningful way, donate to World Vision.

Uh-oh. Treading on toes here because, Mr trailbreaker in your much-loved Columbia Convertibles, you’re going to wear what’s practical and to hell with what anyone else thinks. And you’re now getting ready to hit the keyboard and let off steam with a feisty comment – see below. They just look naff. On the upside, you will provide entertainment to people in remote third-world villages, and that’s no small thing.

Concerned that a thief might use an RFID scanner to harvest your credit card data and make merry? Theoretically possible, but highly unlikely. There are much simpler and more effective ways to garner information from your credit card, like a point-of-sale card reader, which costs less than $20 and only requires a salesperson in cahoots to swipe your card out of sight. If you are truly concerned, wrapping your wallet in aluminium foil has the same effect as an RFID-proof wallet.

These things are beasts. Even if it’s a superlight carbon fibre model a tripod is large, bulky and takes up an inordinate amount of space in your case, and I speak from bitter experience. If you’re a super enthusiastic videographer or a photographer toting an SLR and looking to take night shots of Venice or aurora borealis, then maybe. A Gorillapod might just do the trick, and they’re tiny.

Forget it. Even though you might be travelling in a primitive country that delivers a meagre 110 volts of power from a wall socket you don’t need a converter to beef it up to the 220-240 volts that your phone, tablet and other devices probably run on. Apart from hairdryers and irons and other heating appliances that you have no intention of taking, most devices will recharge just fine on a slender diet of 110 volts. What you do need is an adaptor so you can plug all that stuff into the wall socket, since the world has yet to agree on a common electrical plug.

Last year’s Booker Prize winner you got for your birthday? That life-changing novel by the one-time Mumbai street kid turned literary wunderkind? Forget it. Download whatever you think you might read via Kindle, steal a book from your hotel and raid the magazine rack on your way through the business class cabin.

Guess what. Hotels have pillows. So do aircraft although, yes, they’re small and only slightly more comfortable than a brick. Horseshoe-shaped neck pillows, fine, but a full-size, snuggle-into bed pillow, this is not frolicking on the gender-level playing field. While young women are free to flaunt the rules and board an aircraft with their favourite memory foam pillow, and that’s you I’m talking to in 27A sleeping blissfully with your pillow scrunched against the window. a grown male toting a fluffy white pillow through the airport bespeaks a total lack of cool. It also suggests forethought, which is generally not a male characteristic. Why doesn’t some enterprising start-up offer pillows as a service at airport terminals, to be collected at the other end?

Just kidding. But if they snore, sweat excessively, if their interests, hygiene practices, food preferences or alcoholic intake differ vastly from your own, solo might be a better way to see the world.

Pocwifi, your best travel companion wish you have a wonderful trip.